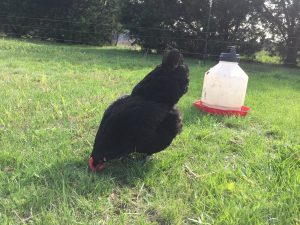 If you aren’t getting as many eggs as you know you should be getting from your flock, how do you tell which hens are not laying and which ones are?

There are a number of different ways to tell, some practical and some not so practical. I’ll go over the most accurate approach and then the most practical.

One of the most accurate (but least practical, for most people) ways to tell which hens are laying is to use a trap nest.

A trap nest is a nest box that has a door which closes on the hen once she enters the nest box. There are a number of different DIY designs for these.

After a hen enters the nest box, gets trapped and then overcomes over her initial excitement from the door falling shut, she lays an egg. Then she waits, trapped in the nest box, until you open it and let her out.

If you put leg bands on each of your hens ahead of time so that each hen has a unique number, then you can keep records of how many eggs each hen lays. A side benefit is that you also find out which hen laid which egg. If you’re following a breeding program and hatching the eggs, then this is valuable information because now you can know both which rooster (assuming you only have one penned with the hens) and which hen a particular chick hatched from.

The problem with trap nests is obvious. You have to be around a good part of the day to let hens out of trap nest boxes. It’s good to check the nest boxes about once an hour and let out trapped hens. Not very practical unless you’re a full-time poultry farmer.

You also need enough trap nests to ensure that each hen has an unoccupied box to lay eggs in, since any eggs laid on the floor won’t be tracked.

Another approach that can work if you have a small number of pens is to isolate them into separate pens. During breeding season, it can make good sense to do this, but it requires a lot of individual housing and isn’t very practical for a larger flock. A second disadvantage is that chickens are flock animals. While I don’t recommend large flocks of 100s of chickens, I believe a small flock of 3 to 15 or 20 chickens is a better environment to raise them in than to raise them in isolation.

A Variety of Other Approaches

There are a number of other approaches that I’ll only briefly mention before getting to the approach that I believe is the most practical and most useful.

The Most Practical Way to Know Which Hens Are Laying

The most practical approach that I’ve found is to check the spacing of the pelvic bones. The pelvic bones form an upside-down “U” shape below a hen’s tail. These bones come down on both sides of the vent and extend slightly below the vent. Below the pelvic bones is a soft area that contains no bones. Then below that is the tip of the keel bone.

With your fingertips, it is easy to find the tip of the two pelvic bones, one on either side at the rear of the hen. Once you’ve located them, you can place one, two or possibly more fingers on the surface of the skin between them to measure how far apart they are in finger widths. One finger width is fairly narrow. Two is wider. Three is getting pretty wide. Occasionally you may find a hen with a pelvic width of 4 fingers.

How does the pelvic width relate to egg laying?

What happens is that as a pullet matures toward laying, her pelvic bones are spaced very narrowly. Then as she starts laying eggs, those bones, which are somewhat elastic begin to expand to make room for eggs to pass between them and out the vent. This widening doesn’t happen all at once, but gradually over a few weeks.

A hen that is laying well will have a much wider space between her pelvic bones than a hen that’s not laying or that has never laid an egg.

As a hen ceases to lay (due to stress, illness, broodiness, summer heat, short daytime hours, or any other factor) her pelvic bones will gradually begin to close up and become narrower. So the pelvic bone spacing is a fairly reliable indicator (at least within a flock of hens all the same breed) of which hens are laying and which ones aren’t.

When I’m trying to tell, I’ll go through my flock around dusk, when the hens are setting on the roosts and check each hen. I can do this within a matter of seconds. Checking a few hens and knowing about how many eggs I’m getting a day from the flock, I can quickly begin to tell that for this particular flock, a one-finger width means she’s not laying. Two fingers mean she’s laying but not exceptionally well, and three or more fingers means she’s one of my better layers. It may vary a little with your flock, and that’s why it’s best to treat this as a comparative measurement, figuring out what width’s make sense for your flock.

When I find a hen that’s not laying, I may remove her to a separate pen until I’m ready to process her for meat. Or I may simply put a gray or black leg band on her so I can easily pick her out later when I’m ready to cull non-layers. Or I may put a purple or other color leg band on the hens that are laying best.

When you’re just starting to use this approach, it’s best to move the hens that you think aren’t laying into a separate coop and let them stay there for a week or two. Continue to feed and water them as normal, and see if you get any eggs. If not, then you were correct in your identification of the non-layers. If you start getting eggs, then check the hens in that coop again to see if you can tell any difference among them and move the one (or ones) that you think are laying back into the main coop. You’ll quickly gain experience and become more accurate.

I’ve found this to be a fairly accurate and reliable method.

One caveat. As your hens get older (2-3 years old) the pelvic bones gradually become stiffer and don’t move as much when a hen goes into or out of laying, so it becomes harder to tell.

It takes a lot of food to make eggs. If you’re having a hard time deciding by pelvic width which hens are not laying, another thing you can check is their crop. The crop is the bag in their throat area where their food goes after they eat it and before it goes through their gizzard and into their stomach. A hen that’s laying eggs will usually go to roost at night with a full crop. One that’s not laying won’t be as industrious about getting food and will have a crop that feels looser and softer. Feeling of the crop can give you a good “second opinion” on whether a hen’s laying or not.

What About the Vent?

Some people may ask, what about examining the vent to see if it is moist or not and to see if it is large and oval-shaped or not. That, too, is a good check, but it tells you more about whether a hen has just laid an egg recently than it does about her general laying tendencies.

If I’m going to go through my flock and remove non-layers, I don’t really want to know which hens laid today or yesterday. What I’m more interested in is whether they lay well on average. In other words, are they a good layer? The pelvic bone test, because it measures a much more gradual change than the vent test, is a more reliable indicator of which hens are good layers and which ones aren’t.

It can be useful to check the vent. A moist, large, oval-shaped vent indicates that the hen recently laid an egg. But it’s not as useful for detecting which hens are good layers or not.

Knowing which hens aren’t laying and which ones are is an important step, but it’s not enough. There is a larger framework to keeping egg production up that involves additional elements, which I’ve written about that in a separate article on how to keep a productive laying flock.