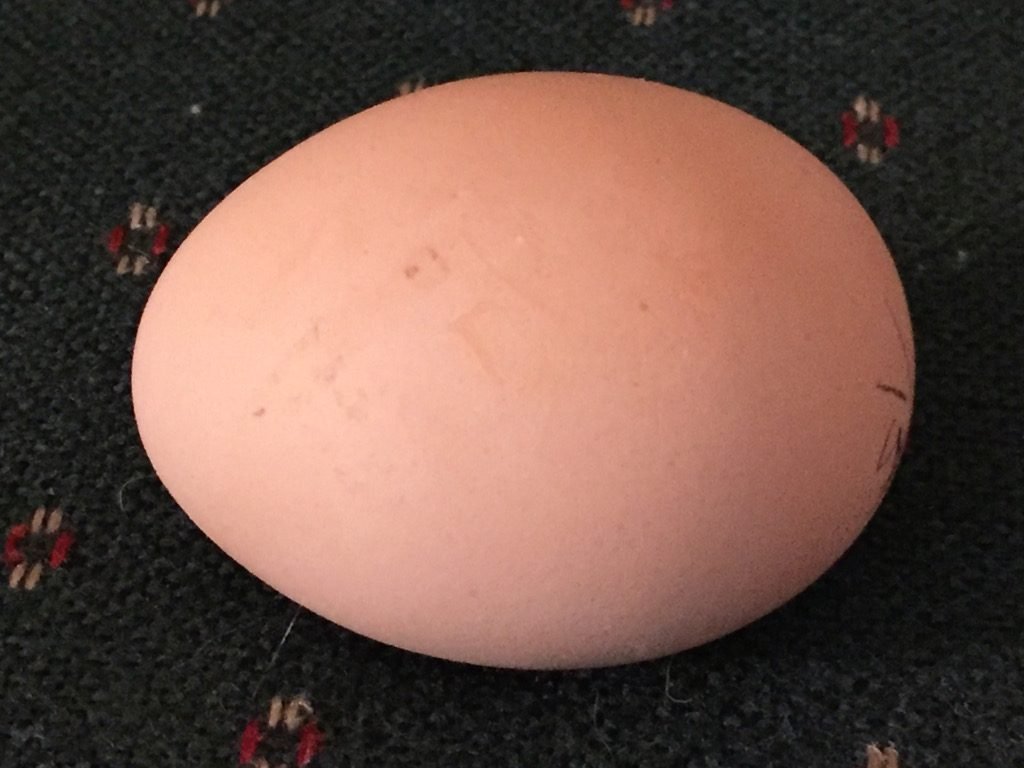 A well-proportioned egg that is suitable for hatching

I recently incubated another batch of eggs from our Black Australorps. One of the first steps when incubating chicken eggs is choosing which eggs to hatch.

Why does this matter?

For several reasons. First, not all eggs are equally likely to hatch. Excessively large or small eggs tend to produce chicks that are less vigorous or that will have a harder time thriving. Also, older eggs are less likely to hatch. Second, based on which breeders produced the eggs, often you may want to hatch a higher number of eggs from one group over another, depending on where you are with your breeding program.

There are several things that go into the process of selecting the best eggs to “set” in the incubator:

1. Decide which chickens to pen together. This needs to be done at least 3-4 weeks before you’re ready to start incubating, and the way you arrange your breeders depends on what your overall breeding plan is. (This is a big topic that I won’t go into much detail on here, but you can read more in the article Selecting Chickens for Breeding), and I plan to address this issue more in future articles.

For this particular hatch, I used eggs from 5-6 different coops. In each of these we’ve housed a rooster with one or more hens. The reason to wait 3-4 weeks after pairing up your chickens before gathering eggs to hatch is that this gives you reasonable certainty that the current rooster fertilized the hatching eggs, not a previous rooster that was with the hen(s).

2. Collection, storage and age of the eggs. I collect about 7 days of eggs for hatching. We’ve had an exceptionally cool (and rainy) spring here in central Texas, which is helpful. The eggs are of better quality when it’s cool.

When we gather eggs, we write in pencil on them the date we gathered them and which coop they are from.

When I selected eggs for setting, I’ll only choose eggs that were laid within the last week. Occasionally, if we’re very short on eggs and still need to hatch, I might go back to 10-day-old eggs, but older eggs don’t hatch as well, so I usually try to avoid that. In hotter weather, this is particularly important, since the quality of the eggs declines faster.

Ideally, you’d store the eggs at 65° (F) upright in egg trays. I normally store them at room temperature (around 74-78° F), and this works fine. When it’s hot outdoors, it’s important to gather the eggs two or three times a day so they don’t sit out in the heat long.

3. Of eggs that you’ve gathered, which ones to hatch? Some eggs are more likely to hatch than others. I look through the eggs and remove any that are too dirty. If I can clean off the dirt with my fingernail or some fine grit sandpaper, then I’ll use them for hatching, otherwise not.

Eggs that are very symmetrical (either round or football shaped — the same shape on both ends, without an obviously narrow end) don’t hatch well, so I don’t use those.

Some breeds produce eggs that are excessively pointed on the small end at times. My Australorps don’t, but if they did, I would avoid setting those eggs.

Any eggs that are significantly larger or smaller than average won’t be as good for hatching. Small eggs produce small chicks that will have a harder time getting off to a strong start. Very large eggs produce larger chickens that tend to not thrive as well as average size chicks.

Basically, I’m looking for average sized eggs that have an average egg-shaped appearance.

Side note: sometimes people say, “Pointed eggs hatch out to be roosters, and rounded eggs hatch out hens.” Despite the fact that many people seem to believe this, it simply isn’t the case. There is no correlation that I’m aware of between egg shape and the gender of the chick inside. If it were possible to tell the gender of the chicken this way, before the egg is hatched, it would revolutionize some aspects of the poultry industry. An article by Don Schrider discusses this point in more detail. 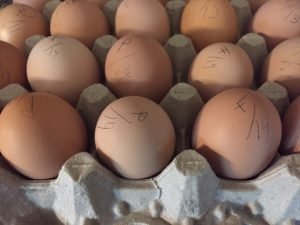 Label the top of the eggs in pencil with the date and a letter to signify which coop each egg is from and make them easier to keep track of.

4. If you need to narrow your choice of eggs down further – Often, steps 1-3 are enough. But if I still have more eggs than what will fit in the incubator, I decide based on which pens they are from. The thinking goes something like: “Oh, we don’t have many offspring from ‘Red’ (often our family lines are named for colors, since we use colored leg bands to identify them). We’ll set as many as we can from that coop.” Or “We’ve got one rooster with 8 hens in that ‘Spare coop’. We don’t need to hatch as many from there as from the others since we don’t know as much about the parentage (since any hen in the coop could’ve produced the eggs). We’ll just fill in with those after we’ve selected all the other eggs that we want.” Choices like that again go back to the overall breeding plan.

These are just a few of the things you can look for when selecting eggs to hatch. If you are more selective in these ways, it will help to improve your hatch rates and the health of the chicks that hatch.