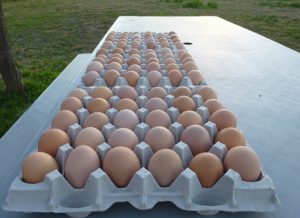 Our Black Australorps usually to lay their first eggs at around 6-7 months of age.

Several things that can affect when they start to lay:

Choosing the right type of food for their age

Layer feed has too little protein to support proper growth of your chickens while they are young and still developing.

And the extra calcium that lay pellets contain isn’t healthy for growing chickens, even though it is beneficial and needed once they start laying.

In short, use the right feed for the stage of development your chickens are in. Use starter/grower while they’re growing, so that they will reach full size and potential. Then switch to layer feed once they start laying eggs.

When were they hatched?

Depending on when your hens were hatched, they will (obviously) reach maturity at different seasons of the year, and this can affect when they start laying.

Black Australorps that were hatched in the spring will mature enough to start to lay in the fall or early winter. That is the time of year when the number of hours of daylight per day is decreasing. December 21 is the shortest day of the year for people (and chickens) who live north of the equator.

Chickens are affected quite a bit by the amount of daylight they receive. Too little daylight, and hens won’t lay, or won’t lay much.

A brief story that illustrates this point:

I was keeping egg laying records, and the number of eggs I was getting per hen from this particular coop was far less than the other coops. The hens were all the same age, and there was no other difference that I could tell between the coops.

Once I realized that the problem was simply that the metal sheeting was casting too much shade into the coop and reducing the amount of daylight, I spun the coop around so that it faced south just like the others.

Within just a few days, the number of eggs climbed up to match the other flocks.

I bring this up because if your Australorps are just getting up to laying age (6 months of age) right around the shortest day of the year, you may not get eggs from them for another month or so. In other words, the short days may delay the onset of egg laying.

Other factors, such as very cold temperature, can also affect, and potentially delay, egg laying.

Getting eggs closer to year-round

If you want eggs as close to year-round as possible, then I recommend hatching or buying chicks in early spring each year. Female chicks hatched in March will reach 6 months of age in September and should start to lay around that time.

Any Australorp hens that are in their second year of laying (or older) will start to molt around September or October, so you won’t get many eggs from them in those months. But your newly hatched, 6-month-old pullets will supply you with eggs through the fall. 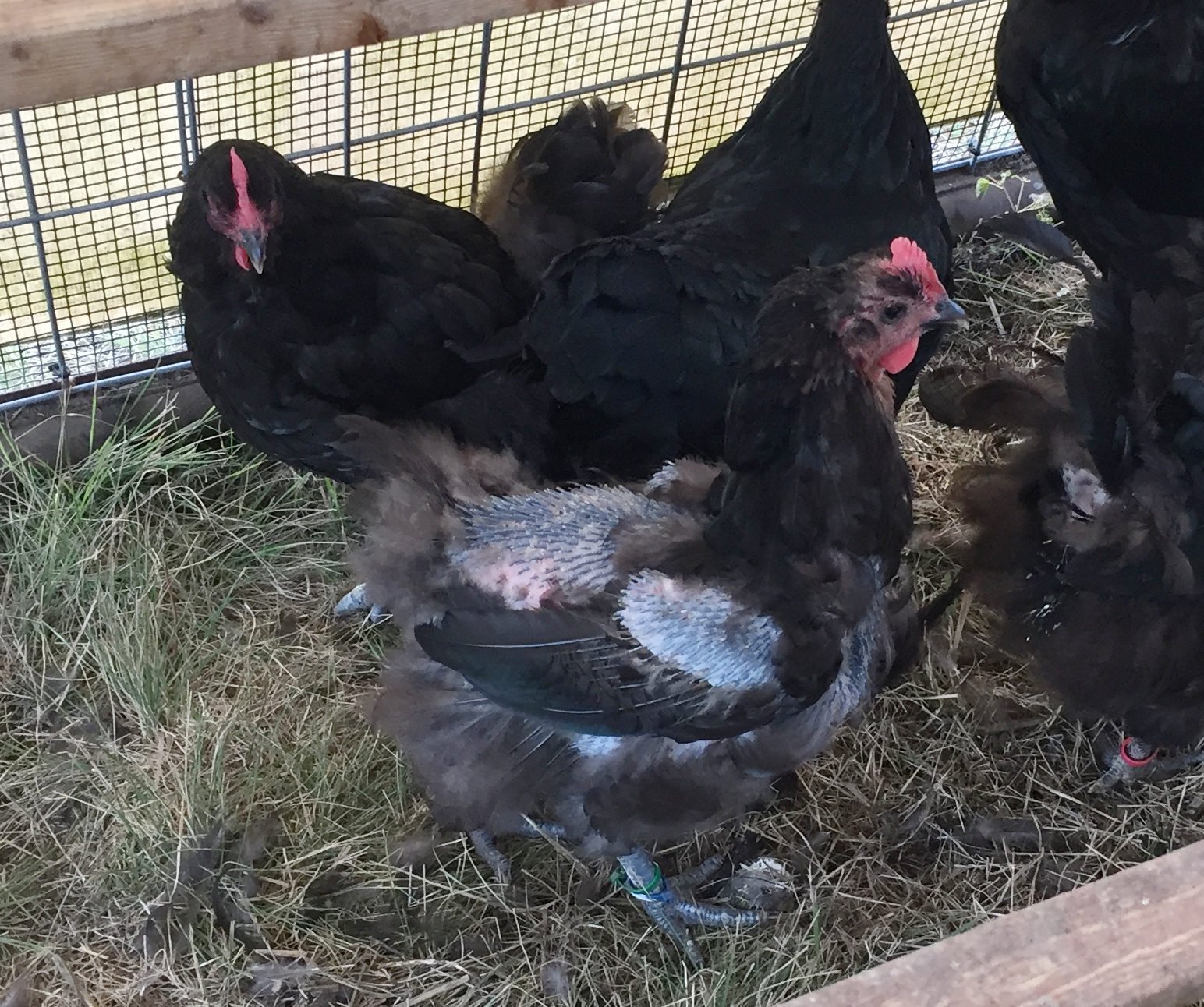 When Black Australorp hens reach about 18 months of age, or in the fall after their first season of laying, they begin going into a molt, and egg-laying ceases until the molt is over.

We usually begin to see some eggs again in December, and lay rates of the second year hens will gradually pick up. As with all breeds, Australorps will not lay as many eggs their second year as they did their first year.

A useful rule of thumb is to expect about 80% as many eggs as the year before.

Which of my Black Australorp hens are laying

There are a number of different ways to tell.

One of the most practical ways is to check the spacing between their pelvic bones and compare that between the various hens in your flock. The hens with wider pelvic bone spacing are likely to be the ones that are laying.

I explain this more fully in an article on which hens are laying.

The first Heritage Black Australorps we raised, starting from a straight run of chicks that awe purchased, began to lay on in early December, about 6 months from the day they were hatched. Incidentally, as mentioned earlier, December 21 is the shortest day (fewest number of daylight hours).

Once they started to lay, their lay rate increased rapidly for 1-2 months until it reached a peak.

For at least several weeks, lay rates were around 85%. Then as the weather began to warm in early summer, at the time they reached about one year old, their lay rate began to decline.

Each year, during the hot, central Texas summer, their laying slows down considerably. Then, as mentioned earlier, in the fall of their second year (at about 18 months of age) they go into molt that lasts for 8 or more weeks, during which they cease laying. Some of them will start molting as early as mid-August.

This is why, as of June 2021, I’ve started to work with several other breeds that I think may be better suited for our climate.

While hens are broody, they don’t typically lay eggs.

In spring, some of our Australorp hens go broody and cease to lay while they set on eggs and raise chicks. The hens that don’t go broody tend to continue to lay well.

The tendency toward broodiness depends on the strain. Australorps that are bred for high-production will be less likely to go broody than ours.

How many years do Black Australorps lay?

We have Australorp hens that are over 4 years old that still lay eggs. They are a good breed to choose if you want a long term egg layer.

But the number of eggs they lay per year does decrease with each passing year, just like it does with all breeds.

A good rule of thumb is that once a flock starts to lay, they’ll produce about 80% as many eggs as they did the year before with each passing year.

This is one reason why I recommend replacing some of your layers every year.

What size egg do Australorps lay?

Australorps lay a medium to large egg. From what I’ve seen, they lay a larger egg than Delawares and Barred Rocks but not as large as White Leghorns or ISA Browns (Red Stars / Red Comets / etc.). The featured photo at the top of this article gives an idea as to the size.

Egg color varies. Most eggs are fairly dark brown, but some are quite light.

Do Black Australorps lay in winter?

Yes. Winter through spring is when our Australorps lay their best.

Yes and no. During winter, ours lay well.

During summer and fall, they lay poorly.

If you lived in a cooler climate, you might get more eggs from your Australorps in summer than we do.

I’m raising a single Heritage strain from one group of starter stock developed by one breeder. If your climate and stock are different, you’ll likely have different results. I would love to hear back from other growers on this.

What about other breeds of chickens? When do they start to lay?

According to the guest article on McMurray Hatchery’s blog, At What Age Will My Chickens Start Laying? – hybrid egg layers start to lay at 4-5 months and heritage breeds start at 5-7 months. Hybrids include commercial White Leghorns, Red Stars and Black Stars. Hybrids are a good choice if you are looking for lots of eggs and if you plan to replace your layers yearly or every year and a half. Heritage breeds are a better choice if you are looking for longer-term egg layers and if you’re raising chickens for meat as well as eggs.

In short, in my experience, Heritage Black Australorps tend to start laying at about 6 months of age during optimal conditions. They lay well in cool weather but slow down considerably in hot weather and cease laying during the fall molt, which can last for a few months.

Different strains of Australorps may following a different laying pattern.