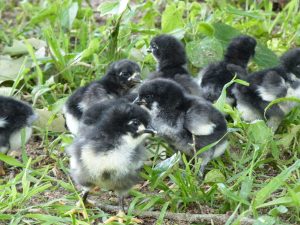 Straight-run simply means that you’re getting the chickens “as-hatched.” No attempt has been made to determine the gender of the chickens.

Does “straight-run” mean that half will be males and half females?

When you order straight run chickens from a hatchery, be prepared to end up with both males and some females. But also anticipate that you could end up with all males or all females. If you really need a certain number of each, specify what you want in your order. You’ll have to pay a little more, but removing the uncertainty makes it worth it.

When raising a straight run, once you can distinguish males from females, move the males (the cockerels) into a separate pen. Since the cockerels tend to be more aggressive than the pullets, putting them into separate coops will reduce competition for food. That will help the pullets grow better.

What is a Pullet?

A pullet is a female chicken less than a year old.

Female chickens over one year old are called “hens.” Both terms, “pullet” and “hen,” tend to be used somewhat loosely, but this more precise definition that I give here is useful in regard to breeding poultry. When you’re breeding chickens, you’ll mainly use hens and roosters (chickens that are at least one year old) as breeders.

What is a Cockerel?

This seems to be a fairly common complaint. Yet it’s not unusual to have an uneven assortment of males versus females when you order straight runs.

When nearly 70% or 80% of your baby chick order comes out males, does this mean that the hatchery is knowingly stacking the odds and sending you cockerels?

Probably not. At least not if they’re reputable.

At one hatchery where I went some years back to record a video tour for them, their standard policy was to sex enough of the chicks to fill the orders for pullets, plus some extras. The sexors would pick a chick from the unsexed bin for a particular breed at random. Then they would sex the baby chick. If it was a male, they would place it into a bin for designated for males. And they put females into a separate bin designated for females. In the end, they would have three different types of bins: males, females and straight runs. These were clearly indicated, and this made it easy to keep them all straight.

Then, when the hatchery staff were filling orders, if they didn’t have enough straight run (unsexed) chicks to fill a particular order, they would pull equal numbers from the male and female bins to fill the order. This is completely fair. But it doesn’t ensure that you’ll get near a 50-50 split, at least not for small orders.

I can’t vouch for every supplier, but at least this particular supplier was 100% fair in how they fulfilled orders, as I would suspect that most are.

Why? Because they’re happy with their order. They were, perhaps, trying to save money by ordering a straight run, and when they got more than 50% females, they were happy. So they don’t complain, and you never hear about it.

Hatching Your Own Straight Runs

Obviously, by definition, any chicks that you hatch yourself are going to be straight runs.

My preferred way to get baby chicks is to hatch from my own flocks. When I’ve done this, sometimes I’ve gotten as much as 60% males with a hatch size of about 30 chicks. In fact, since females are usually the ones in short supply when planning how many chicks to hatch for our flocks for next year, I usually use 60% males as a guideline for planning. This helps me to be reasonably sure to set enough eggs and produce enough pullets.

If you want a certain number of chicks to be females, I recommend buying pullets specifically. That said, there’s still a possibility that you will end up with a few males.

Why? Because most hatcheries only guarantee 90% accuracy when sexing baby chicks. What this means is that if you order 30 chicks, you can expect about 90% x 30 = 2.7 mistakes. That means it would not at all be unusual if you wound up with 2-3 males in the order.

But realistically, I think their accuracy is better than 90%. But it’s not 100%. 90% accuracy is what the hatchery is willing to guarantee. They are likely giving themselves somewhat of a safety margin so that they don’t have to deal with customer support issues or refunds from shipping the wrong gender of chicks.

To increase the speed at which sexors can distinguish between male and female chicks, feather sexing is often used. Feather sexing is also a much simpler skill that people can learn more easily than vent sexing, so it can reduce the cost of sexing chickens, especially for large hatcheries.

What is feather sexing?

It is when you rely on a sex-linked trait in some breeds that causes certain feathers to grow more rapidly in one gender than the other. For example, the males in a particular breed for a particular hatchery will have faster growing flight feathers than the females.

This doesn’t work with every breed. But when it does work, it can make sexing of baby chicks much faster (one source says “up to 4,500 chicks per person per hour”) and much more accurate.

I’ve seen conflicting information on this, but the information that I’ve gathered and what I’ve been told from what I believe are reliable sources is that it is related to the breeding, not just the breed. I may be wrong about this, but I believe that you can take any breed and make it feather sexable.

How? By maintaining separate male and female lines. In the male line, for example, you selectively breed for fast growth of certain feathers. In your female line, you selectively breed for slow growth of those same feathers. The feathers involved are typically the primaries and the coverts. To produce the eggs that you will hatch, you cross males from the male line with females from the female line. The male offspring are then distinguishable by their faster feather growth and the females by the slower growth, again, of the feathers that you selected for.

People who complain that feather sexing doesn’t work aren’t actually implementing the type of breeding program that causes it to work.

If it’s very important to you to know exactly how many males or females you will be receiving in an order, the most reliable way is to buy started pullets or started cockerels instead of baby chicks. These have been raised to the point to where they are now old enough that the grower can discern which ones are males and females accurately. It’s still possible to have occasional mistakes, but the overall accuracy should be better than any of the other methods mentioned above.