Selecting and Candling the Eggs

We went through first and selected the eggs to use. We’ve already set aside any that are too dirty or too old, now we’re candling the “good” eggs to look for any that are cracked. Sometimes the cracks are so fine that they are nearly impossible to see until you candle the egg. With the candler, the cracks are pretty obvious. They usually form a line or a radiating, branching pattern, similar to a cracked windshield. 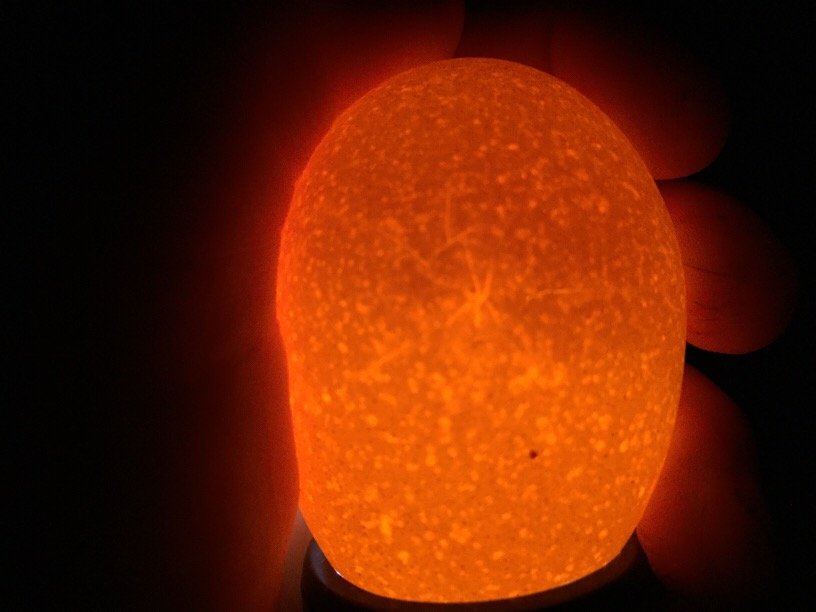 Candling an egg with a crack in it

Some of the eggs have splotches in them. Others don’t. The splotchy eggs should incubate just fine. 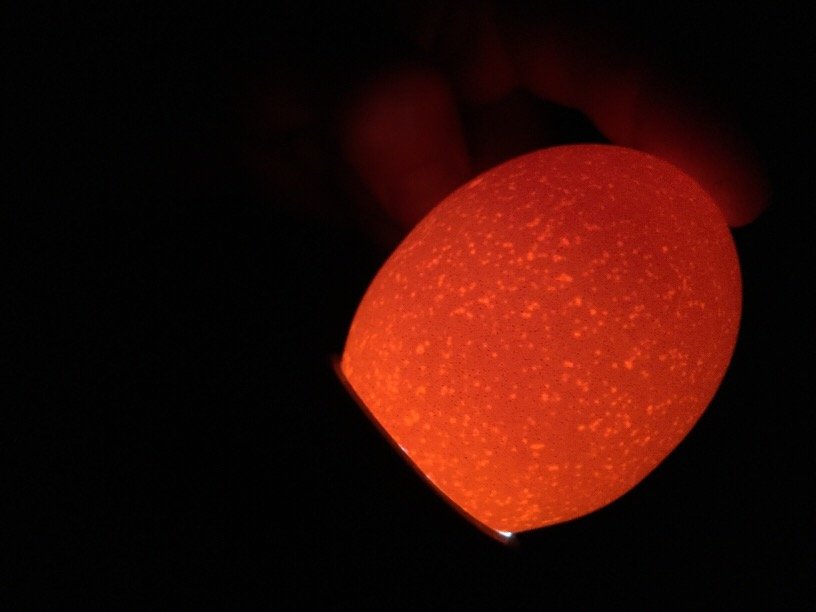 An Egg with Splotches

The candler I’m using is made by Magic Fly and runs off a little plug-in-the-wall 4.5V transformer. It’s basically a very bright flashlight with a cup that fits against the egg well. 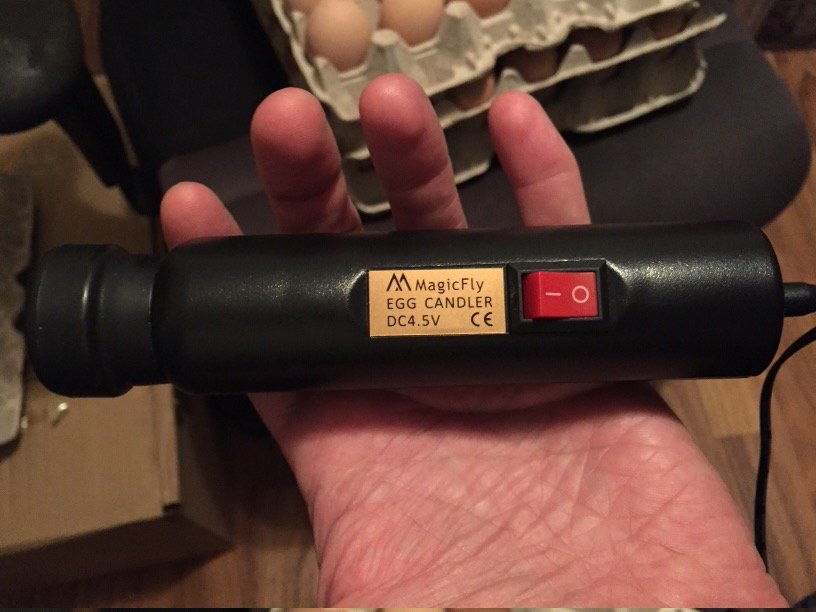 In addition to cracked eggs, we also set aside any eggs that are too symmetrical — in other words, any eggs where both the pointy end and the rounded end look about the same. Those “football-shaped” eggs aren’t as likely to hatch.

We also avoid setting eggs that are abnormally large or abnormally small. For incubating, we’re looking for average-sized eggs that have a nice egg shape to them. And we want them to be clean — they don’t have to be spotless, but they should be clean.

The eggs ideally should be no older than seven days. I’m going back a little more than that with these because we’re in short supply of eggs right now, particularly from our small breeding flocks, and I want to hatch all the chicks I can. Generally, the older the eggs are, the less likely they are to hatch. Seven days is a good cut-off.

We’ve set up the incubators in a spare room in our home that has a window AC unit but no central air. We chose this spot because it’s sort of out of the way, and we need to be able to keep the room temperature somewhat stable. If the temperature in the room were to fluctuate a lot, the temperature wouldn’t be as stable inside the incubator.

I set the window unit to 82° (F) for now, on economy mode. That’ll keep the room from getting too hot and will help stabilize the temperature. These incubators can’t cool, they can only heat, so it’s important to have some cooling in the room, at least here in Texas during the summer.

I’ve put the owl clips on. An owl clip is basically a big wide paper clip that holds the lower water tray together with the mesh grate. The egg turner sits on top of that. In a previous article that I wrote on incubators, I’ve explained how it’s good to do some work on the egg turner the first time you use it to limber it up and make it to where it turns easily. 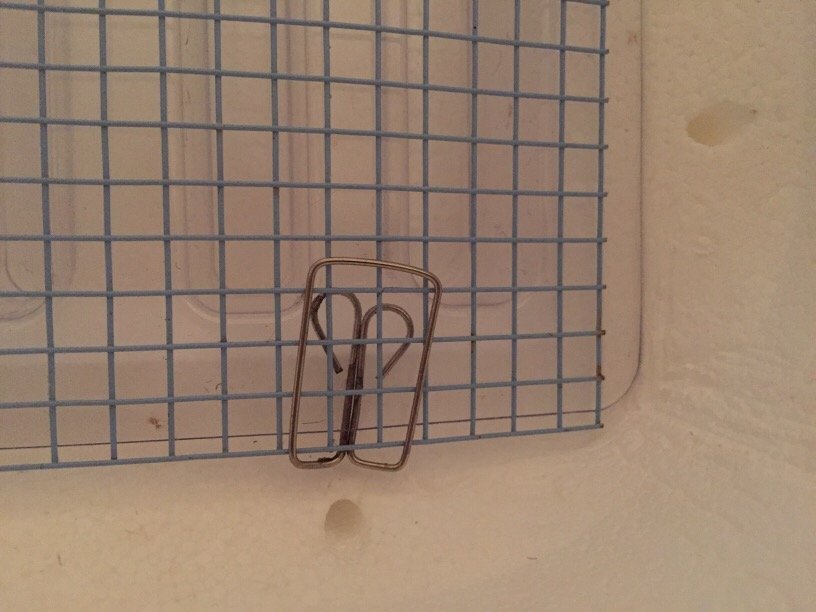 Owl clips hold the mesh to the water tray

My son helps me get everything plugged in.

Now we’re going to start loading the incubator. We will set the eggs one by one into the egg slots. We’ll leave the slot nearest the mother open because an egg in that slot would likely get crushed. The incubator I’m using is the Genesis 1588 made by GQF. With this particular incubator, we can get 41 eggs in a batch. It’s a circulated air incubator (meaning it has a small fan in it). It’s 12V and runs on a transformer that gets plugged into a 110V outlet. It has a digital thermostat plus a digital hygrometer and a temperature readout built into it. This is my favorite small incubator to use because it’s so easy to use. 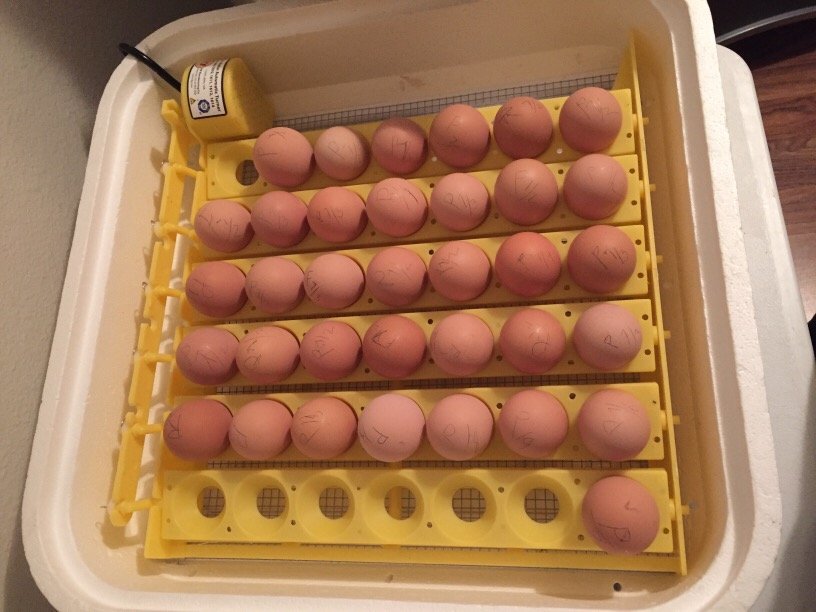 Here’s the incubator after we’ve set most of the eggs.

As you can see, on the tops of the eggs, we’ve written a date in pencil and a letter that tells the coop from which they were collected. This makes it a lot easier to keep track of how old the eggs are and who the parents are, which is important for breeding.

Most of these eggs are from young hens that we hatched about a year ago. Some of them are from our smaller, main breeding flocks. I am most interested in the eggs from my main breeding flocks, but since we have so few breeders, I’m filling in with the other eggs and will supply chicks that hatch from those to some friends of ours who are also beginning to breed Australorps.

James just reminded me that it’s important to turn the water tray so that it’s easy to fill it without having to remove the egg turner. This is an important point. I’ll need to fill the water tray every few days, and it’s best to get it situated correctly right from the start.

Now that we’ve pulled out the egg turner and re-situated the water tray the filler slot for each of the troughs is down at the end, making it easy to add water. 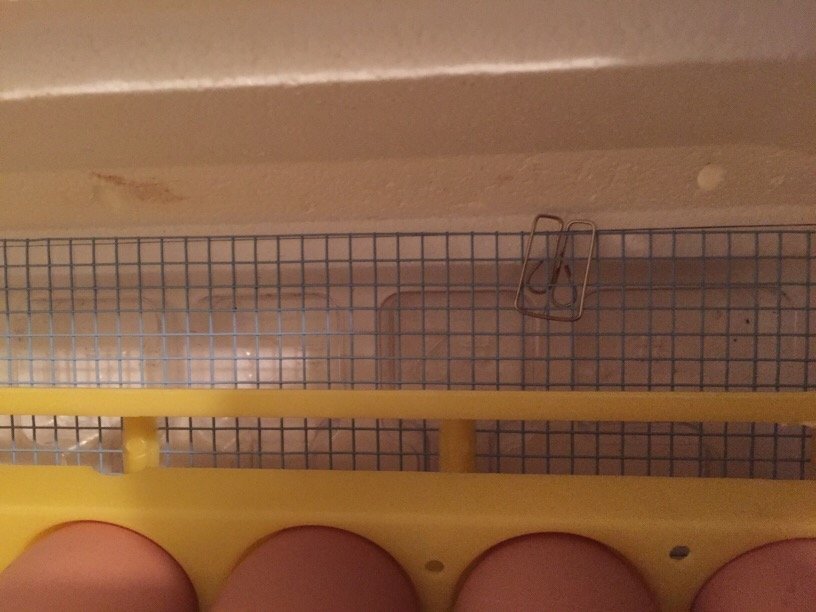 We discovered on a previous hatch is that it’s best to run the incubator toward the low end of the recommended humidity range during the bulk of the incubation period. Our target, for now, will be 45% RH (Relative Humidity). The recommended range is 45-55%.

We use a clear glass kitchen baster to add water. We just put a little water in the baster, and we make sure not to drip it on the eggs when we transfer water into the troughs. Normally, we’d put in enough water to fill the trough about 3/4 to 4/5 full. 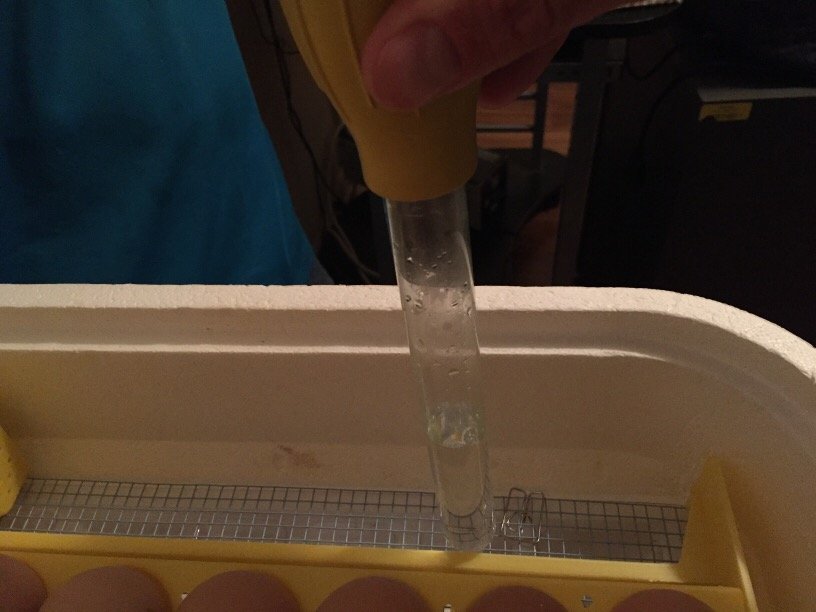 The way these incubators control humidity is by the exposed surface area of the water in the trough. It has 4 troughs that vary in surface area. Trough #1 has the most. We’ve discovered from previous hatches that trough #2 is about right for our climate. But it feels very humid to me in the room right now, so we’re only going to fill trough #2 a little. That way, if we decide we need to use a smaller trough for lower humidity, we’ll be able to make that switch sooner and not have to wait for lots of water to evaporate.

There’s a small slot in the side of the lid where the power cord for the egg turner comes out so we bring the cord out through that slot, so the lid only goes on one way. 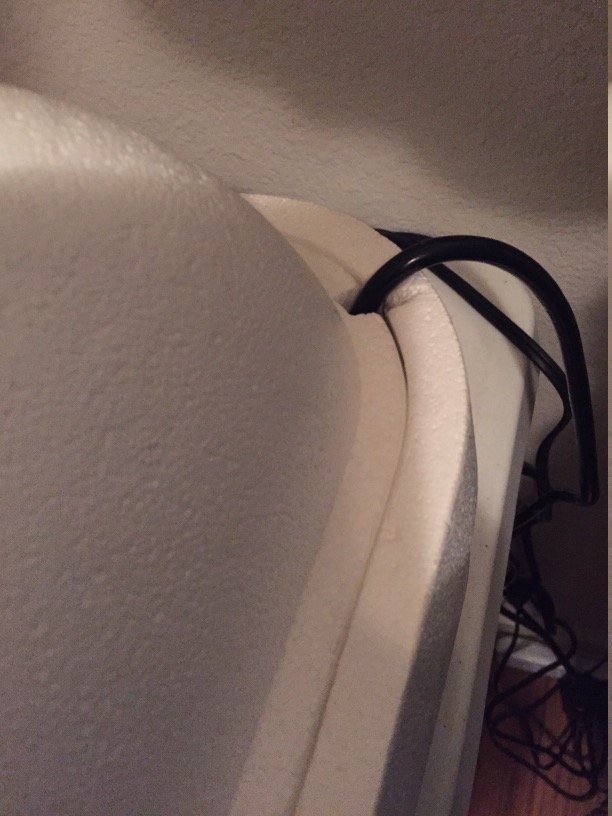 Slot to thread the cord through

I forgot to mention earlier but that’s a good thing to level the table before you start. Because if you don’t, the water will tend to flow to one end of the trough instead of being even. Then when the water level gets low, the humidity level will begin to get uneven. It could allow water to spill inside the incubator. If it does, it’s troublesome to clean up, and it makes it even harder to regulate humidity until it is cleaned up.

The second incubator is one that I don’t like as much. It’s also made by GQF but it the model 2362E. It has an electronic thermostat, but the thermostat is not digital. And there’s no digital temperature readout for it, so you need a separate thermometer and hygrometer to keep tabs on temperature and humidity. I use a digital Incutherm thermometer/hygrometer. Another difference it that runs off 110V AC. (You can read my separate article with more information on why I think the GQF 1588 is considerably better and easier to use.) But as long as you’re careful, you can get good results with the 2362E. And since it’s paid for already, we’re going to use it — it just takes a bit more effort. 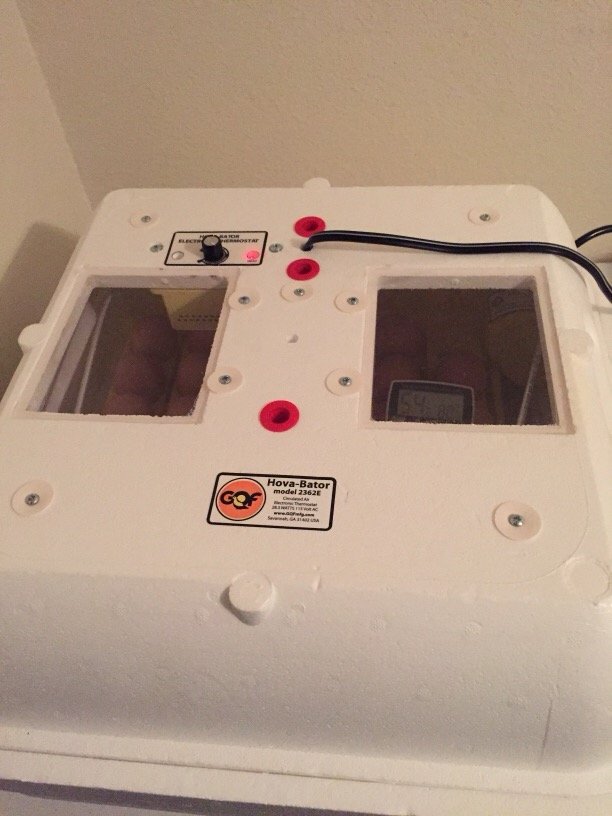 Keeping Records of the Hatch

We’ve learned from past experience that it’s good to keep a record of what we’re doing, so we start a clipboard with a log sheet on it for each incubator. On it, we’ll keep track of the date and time of when we make various observations and also any things that we do. For example, we’ll make a note when and to which tray we added water. This helps us learn how often the water gets low. It lets us know how we’re doing, on average, with temperature and humidity, and it gives us something to refer back to on our next hatch.

If this hatch goes well, we’ll have a clear record of what to do again. If it goes poorly, we’ll have some idea as to what we should adjust. Keeping good records is a big part of both incubating and breeding, since you’re always looking for how to do more of what works and less of what doesn’t.

Posted in Hatching and Incubation