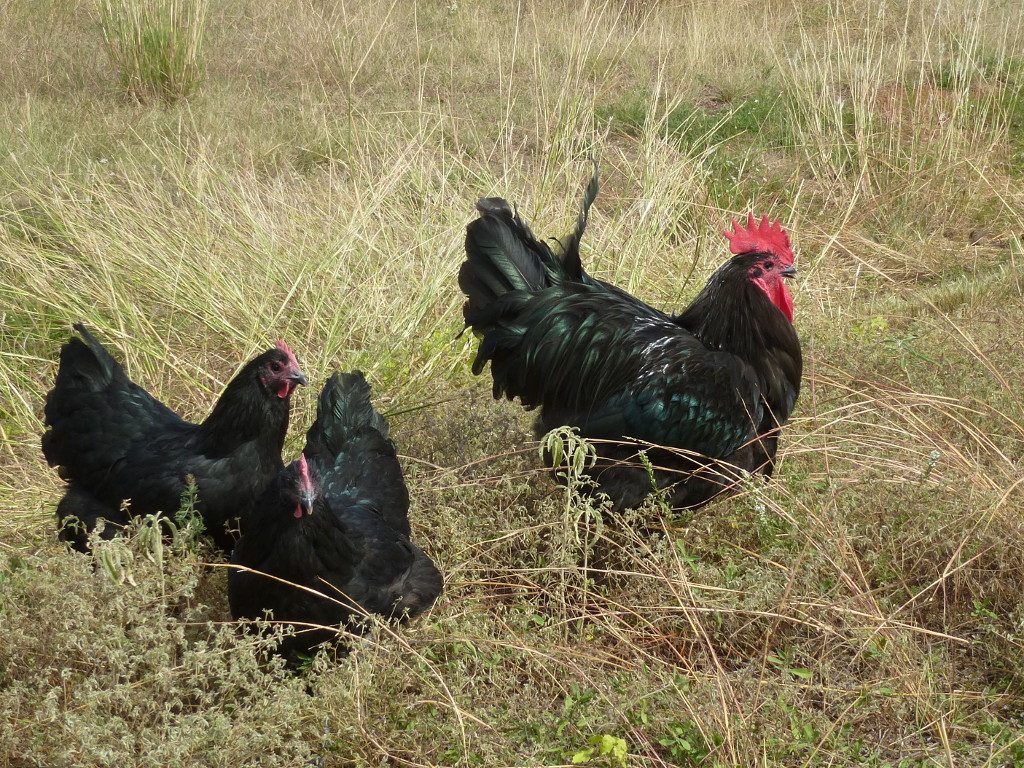 The clearest and most complete definition of “Heritage Breed Chickens” that I’ve found is on the American Livestock Breeds Conservancy (ALBC) website.

Let’s go over each of these points in more detail.

APA Standard Breeds — In short, heritage chickens come from parent and grandparent stock that are breeds recognized by the American Poultry Association (APA).

Why is that important?

For one, breed standards, such as the APA Standard of Perfection delineate what is or isn’t a good representative of any particular breed. Breed standards bring a level of consistency and clarity as to what constitutes a particular breed. Such standards function as a guide and goal for breeders who are seeking to maintain a breed. Each breed of chicken was originally developed for a purpose. If a breed begins to degenerate away from the standard that is associated with that breed, then it also become increasingly less-suited for it’s original purpose.

Breeding “to the standard” (comparing the chickens to the standard and culling those that do not meet the standard) when coupled with a good breeding program helps to keep the breed from degenerating.

[Side note: The New Hampshire Red was developed many years ago from a different breed, the Rhode Island Red, by a breeder who began to focus on certain traits while ignoring or de-emphasizing other Rhode Island Red traits defined in the breed standard. In particular, he was aiming to develop a faster-maturing chicken. With the help of later breeders, this breed was stabilized and established as a new breed that has some very practical uses. So it’s important to realize that there can be a purpose in digressing from existing breed standards, but it needs to be done with a goal or purpose in mind, and the chickens that result from such an endeavor may become a different breed than the original. Still, in cases like this, the breeder has a breed standard in mind that he is breeding toward. It’s just different than the original breed standard.]

That may seem like something we could take for granted, but some specialized chickens, such as the Cornish-Rock Crosses used for meat production across the U.S. do not reproduce naturally. It is highly unlikely that you will ever be able to produce offspring from them, and even if you were, it wouldn’t be practical or productive to do so. Most commercial turkeys, most of which are “Broad Breasted” to meet consumer demand for large amounts of white meat, are also unable to reproduce naturally.

Long, Productive Outdoor Lifespan — Heritage Chickens used for egg laying should produce for 5-7 years, and roosters should be viable for 3-5 years.

This makes Heritage Chickens a good fit for backyard flocks and small farms that aren’t excessively focused on efficiency and profit, as it enables you to keep productive birds longer. Specialized layers, such as the modern White Leghorn and the ISA Brown, though they lay very efficiently and produce lots of eggs during their first year or so of lay, they are not long term layers. They were bred and developed for high, short-term egg production to fit the industrial model in which they are used primarily. Many people who raise home flocks prefer to have hens that will lay for 3 or more years.

I don’t expect to get a full 5-7 years of egg-laying from every hen, but we do have some 4-year-old Black Australorp layers that are still producing. Production, with any breed, will decline from one year to the next, so I aim to replace most layers by the time they are about 3 years old.

The Australorps that we raise typically reach harvest size at about 20 to 22 weeks. You could process at 16 weeks, but the birds would be somewhat small.

Slow growth is important for the overall health and bone structure of the chicken, and it contributes significantly to flavor. If you don’t believe me on this, try cooking up a store-bought broiler (a Cornish cross harvested at about 7 weeks of age) and a Heritage Chicken harvested at 16 weeks or older. Use the same recipe. Be sure to adjust cooking time and temperature as needed to take into account the firmer texture of the older chicken. Compare the flavor side by side to see which is more flavorful.

Heritage Chickens of any breed tend to be much more flavorful. The meat is darker, and there is more dark meat because they actually use their muscles considerably when foraging and such. The meat texture is more firm, with a longer grain. Because of the difference in texture, they are best cooked over lower heat for a longer period of time. In addition, they make excellent soup and very flavorful broth.

No longer would most commercial growers of chickens use dual-purpose breeds, but instead they would use one breed for egg laying and a different breed for meat production. This paralleled the specialization that was taking place in other types of industry.

Ongoing breeding effort was funneled into this specialization, producing meat birds that now reach market weight in as little as 35 days from the date of hatch, and hens that begin laying at around 18-19 weeks of age. These specialized breeds fit in with the overall shift that was taking place toward increasingly industrialized (and large scale) agriculture.

With that shift, less and less focus has been placed on breeding and maintaining the quality of heritage chickens. There are still very dedicated breeders today, but it is no longer part of mainstream food production.

Heritage chickens aren’t for everyone. But they fit much better with the goals and management style of many small-scale or home producers, in my opinion than specialized, commercial birds. If you’re wanting to keep chickens long term and have a high quality meat- and egg-producing flock that you can keep going from year to year on your farm without having to buy chicks or hatching eggs from other sources, they are an excellent way to get there. It’s a little challenging to find good starter stock, and you will have some work to do once you get them, but it is a rewarding endeavor.