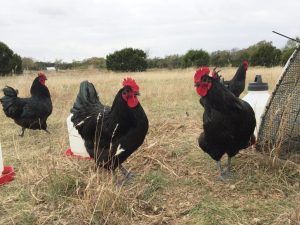 There are several kinds of aggression:

In 5+ years of raising them, I’ve never had serious difficulty with Black Australorp roosters being aggressive toward people. They do tend to be somewhat aggressive toward each other, but that’s true of pretty much all breeds of roosters.

Our roosters have nearly all had good temperament and are easy to manage. We often pick up and handle the roosters, that helps some, too.

That said, I think this has as much to do with breeding and the particular strain that we’re raising as it does with the breed in general.

Occasionally, when we’ve hatched and raised a new batch of chickens, I’ve encountered one or two roosters that will peck people. I’ve always made it a point to cull these from our flock as soon as possible. I definitely don’t want them to reproduce because aggressive sires will tend to produce aggressive offspring.

Are Black Australorp roosters aggressive toward other roosters?

The roosters will become aggressive toward one another to varying degrees.

At times, we have been able to raise multiple roosters in a single pen with no hens without much difficulty. They “talk” a lot and strut around a lot, but they reach a sort of a truce.

At other times we’ve had to separate Black Australorp males. This usually happens as the cockerels reach about 6 to 10 months and are trying to prove themselves and establish a pecking order. Usually removing the one or two roosters at the bottom of the pecking order helps to resolve this.

Interestingly, occasionally, there will be an older rooster that discourages younger males from fighting. If he spots two younger males fighting, he will break it up. This is excellent when you have a rooster like this. Then you can potentially keep him in a “bachelor” coop to maintain “law and order.”

If several Black Australorp roosters were raised separately from each other, in different pens, combining them into one pen (or even letting them free range at the same time) can be problematic because they will tend to fight. So we avoid that.

The roosters don’t seem overly aggressive toward the hens, but many of the hens do tend to lose a lot of feathers on their back, which they later regrow when molting. I think the large size and weight of the Heritage strain of Australorps that we’re raising contributes to this.

How do you tame an Australorp rooster?

Simply handling the rooster on a daily or nearly daily basis will help to tame him.

As mentioned earlier, if a rooster is aggressive toward me or anyone else, I will cull him instead of trying to tame him.

Roosters that aren’t aggressive may still be standoffish. Picking up the rooster every day for a minute or two and carrying him around helps to make him more “friendly” and less standoffish.

When you pick up and hold a chicken, it’s best to do so in a way that makes them feel secure.

It may seem a little counter-intuitive, but I will approach the rooster from the front and place my hand, palm-side-up under his chest, with my pinky and forefinger slightly spread and the two remaining fingers under his breast so that I can place his legs in the gap between my two outer fingers.

Then with my other hand, I can steady him. A chicken that’s held in this way feels very secure and well supported, and they’ll usually calm down fairly quickly, even if they’re not used to being held. If not, you can gently place their head between your arm and your side. That blocks out some of the light they are getting and tends to calm them quickly.

After a few minutes of carrying around a rooster, release him by putting him down gently. After a few days of this, he’ll become more and more used to being handled and interacting with people, and he won’t be so standoffish.

Yes. A LOT. They’re pretty noisy. If I turn on a light in the house during the night, they will crow during the night. They’ll also crow in the morning and throughout the day.

We have about 40 chickens, and to keep breeders separate, we have them in a number of separate coops, mostly portable hoop-style coops. During the day, a rooster will crow from one coop. Then another from some distance away will crow to answer him. And another will crow, and this will pass through all of the coops, then they’ll often start over. They don’t crow constantly, but they do crow often.

I wouldn’t say that Australorps are any louder than your average breed, but I also don’t think they’re any quieter — at least not the roosters.

This is an interesting question. When I first began raising them, I noticed that they had dull spurs — rounded over, not much sharper than a pencil eraser. The spurs were about a half-inch to an inch long at this point, but they were harmless.

Then as the roosters get older, particularly in their second and third year, they develop sharper spurs like most other breeds. The spurs will eventually get 2 inches long or so and are quite sharp.

Black Australorps aren’t very aggressive, in my experience. If you encounter one that is, the best thing to do is cull him before someone gets hurt.